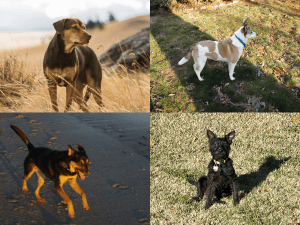 I love dogs. And apparently have all my life. I thought my love of dogs came later in life, but turns out I was wrong. While watching the recent Westminster Dog Show, I asked my mother about dogs we had in my childhood. I remembered 3 dogs, but turns out there was a 4th.

We lived in Tucker, GA up until I was about six. That’s when we moved to my Mother’s hometown, Statesboro. Mom doesn’t remember exactly which birthday it was (It was when we lived in Tucker), but she told me I begged and begged to get a dog. So she and Dad got me a dog for my birthday. Mom said it was a chocolate poodle and just the prettiest dog. We didn’t have the dog long because I was allergic to the pup, apparently.

We also had a couple of chihuahuas and a brittany spaniel. Their names were Boo Boo, Choo Choo, and Freckles.

As an adult (as much as a 20 year old kid can be considered an adult) my partner at the time and I decided to get a dog. I was hesitant. I had not really been around dogs that much in years. We went to the Atlanta Humane Society and picked out a dog. It was a cute little gray pit. I don’t remember why but we were not able to adopt her. So my partner suggested we get another dog he saw. I wasn’t keen on this particular dog. I thought she had a strange look and seemed not to care anything about us. She was a big dog with reddish fur and a tan strip right down her back. She scared some people but was so gentle and sweet. Well, we ended up adopting her and took her home. Her name was CoCo, but we changed it to Mako. And boy was I wrong about her seeming uninterested. While she was not an overly affectionate dog, she was a loving and loyal companion. I got home from work one day and she was sitting on the front stoop of the house. OK, that’s weird, I thought. The door was a little open. I knew a friend who had a key had dropped by and realized he must not have closed the door completely and Mako had gotten out. She couldn’t get back in because we also had a screen door. I don’t know how long she was out or what she did, but she was diligently guarding the front door where I got home. She lived to be 17 years old. She never had a single health problem and it was simply old age that made us have to say goodbye. I remember that day vividly. My real first time going through having to say goodbye to a pet. It was hard. I had to take a few days off from work.

The second dog I had as an adult was a true rescue. One day my (by then) former partner (who remains my best friend to this day) was in Waterloo, AL and came across a tiny puppy sitting on the side of the road. That little pup had a brother who, unfortunately, didn’t make it trying to cross the road. He stopped and picked up the little dog, a girl, and brought her back to Atlanta. He was with someone else by this time and he called me to come to their house. I get there and see this little ball of fur with the fattest little belly. She got named Josephine – get it, Waterloo. She was mostly white with some brown spots. We called her a cow spotted dog. She was another sweet dog who just wanted to love and be loved. She and Mako quickly became close sisters. They had about 6 years together before Mako passed away. Then a year and a week later, Josie passed away at 7 years old from liver disease.

After those two passed away so close together I was done with having a dog for a bit. I just couldn’t go through losing another one. That lasted for 2 years before the best dog ever came into my life.

In the late fall of 2006 I decided it was time for another dog. At the time, I was working from home doing the split traffic reporting shift. Working early mornings and then again in the afternoon meant I had the middle of the day to do whatever. I didn’t tell anyone, but started going to the Atlanta Humane society and checking out all the dogs. I did this for probably a month or more. Every week I’d go by and just see. One of these times I saw a spaniel that was absolutely beautiful. I spent some time at her cage and she seemed to like me. I was hooked. The dog was named Fancy, which I would have changed to Nancy. Fancy wasn’t available for immediate adoption. It would be 2 weeks before she became available to go home with a forever family. I bet I went every other day to see her in her cage. The two weeks were up and I took myself to AHS as soon as they opened for the day. I told one of the staff which dog I wanted to adopt and she looked at me and said so are they, as she was pointing to 3 couples. She informed me it would come down to a bidding war and whoever offered the most got the dog. I was in for up to $200, but she eventually got adopted for $400. That was good for AHS, but bad for me. I was devastated.

I ended up calling my best friend to give him the bad news. I had, by then, told him I was going to get a dog. He told me to wait at AHS and he’d leave work and meet me there. Once he got there he cheered me up a bit and said let’s go through one more time and maybe you’ll connect with another dog. Begrudgingly, I said OK and off we went. I have no idea how many dog cages they have in their dog area…but it is a lot. We walked up and down every aisle and I just didn’t feel that connection. That is until we got to the very last cage. There sat the cutest little dog, about 6 months old, and she was smiling and wagging just the tip of her tail when we walked up. I instantly felt the connection I was looking for. When you go to adopt a dog at AHS they let you take the dog outside to a fenced in area so you can see if that pooch is a good fit. It happened to be raining that day, so the staff member took us into an enclosed hallway. It was long with doors on both ends. Once the door closed she let, then named Lady, off the leash. As soon as she did, that little dog ran like lightning to the other end of the hallway and turned around and came right back and licked me on my bald head. That did it. I told the woman I wanted to adopt this pup. She was surprised I made the decision so quickly but there was no doubt in my mind.

When I got her home I knew I wanted to change her name. I asked the best friend and another close friend to give me some name ideas. They both had Sadie on their lists, so Sadie it was. She took to it immediately. On the second day I had her, I thought I lost her. At the time, I lived in a 2nd floor condo in a 2 story building. It was an old apartment building so it had stairs outside to get to my place. I had gone to pick up a few things from the store and had my hands full and Sadie on her leash. We were at the bottom of the steps and I decided to let her off the leash to run up the stairs. Instead, she took off running fast. I knew there was no way I could catch her. Thankfully the condo complex was completely fenced. So I figured this dog is gone unless I can somehow get her before someone drives in or out the gate. About that time she comes flying around the opposite end of the building that she took off toward and zoomed past me with a big grin and her tongue hanging out. She ended up doing 2 very fast laps around the building and then went right up the stairs and waited for me. Obviously, she just need to run off some energy. And boy did she have some energy.

Just about every day I would take her to historic Oakland Cemetery in Atlanta to get her exercise. I would drive through over to what is called the “pauper’s field” and let her run. It had a  steep hill and I would stand at the bottom and throw a tennis ball to the top. She’d end up running up and down that hill fetching the tennis ball until she got tired. She always let me know when she was done by just ignoring the ball when I threw it.

Sadie was an adventure dog. I can’t tell you how many hikes and camping trips she went on. And she loved the water. There is a spot up around Big Canoe, GA where the Amicalola Creek is wide and not too deep. The best friend and I took her up there to go swimming all the time. I do believe that was her favorite place in the world. For a number of years we’d take vacation between Christmas and New Years and go to Cape San Blas in Florida. They have beaches that are dog friendly. Being winter, very few people were on the beach. We were able to let Sadie run free and she had the absolute best time.

We had to say goodbye to Sadie when she was 14. She had been having some problems and I took her to the vet and they said they thought she might have bladder cancer but it would take some tests to be sure. Those tests took what seemed like forever to come back, but they did confirm she had a cancerous tumor at a place in the bladder where they could not do surgery. They said she probably only had a couple of weeks left. Turns out she had 3 months left before I could tell she would soon be suffering. This time I didn’t take her to the vet to say goodbye, but opted for an in-home service. Listen, I will never not use an in-home service for euthanasia. It takes so much of the sadness and stress out of losing a beloved pet.

And now, I have a Bella. Bella was originally my nieces and nephews dog but ended up being my mother’s dog. And now she’s pretty much my dog. She follows me everywhere. She’s a little thing, a mix of a min pin and a miniature schnauzer. I’ve never had a dog so small. But she is the sweetest little thing and loves to play. She gets in the fenced portion of the back yard and just runs and runs. I love that little dog.

So that’s the story of how I came to have a dog for most of my adult life. My dogs have always been shared dogs. Meaning my best friend and I would share taking care of the dogs. That meant that the dogs always had someone who they loved to take care of them if one of us had to go out of town or something and it worked great.

Dogs are just the best.