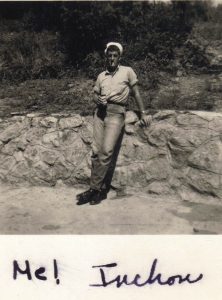 Dad as a young sailor in Inchon, South Korea

Happy Friday! It’s Father’s Day weekend and I hope you get to enjoy a nice weekend with your dad. Or kids. Or both.

My dad, William, passed away in 2001 at age 69 after some health problems. I, and many other people, miss him all the time. We actually just recently hit the 20 year milestone of his death. He died right around Father’s Day.

Dad was originally from a tiny town called Soperton, GA. He grew up on a farm with 2 brothers and a sister. All but one of them has passed away, too. My paternal grandparents passed away when I was a young child, so I didn’t get to know them as well as my maternal set.

Dad spent time in Korea as a navy corpsman during that war. Now that I put 2 and 2 together, that was probably one reason he loved the show M*A*S*H so much. Well, that and the fact that it was (and still is) an excellent show.

Dad was one of a kind. Seriously. Between his gregarious personality and tall tales he could have a crowd of people laughing all night. Everyone that ever met him just loved him.

Dad was the ultimate salesman and could probably sell firewood in the middle of a South Georgia heat wave. Or as we like to call it…summer. For most of my young life he was a salesman for a liquor distributor. He traveled around to package stores and bars selling liquor — usually Mr. Boston. I also distinctly remember him selling Amaretto di Saronno and having promotional materials around the house.

Dad was selling liquor when he and mom moved the family to Statesboro. His office was still in Atlanta, and he made the 200 mile drive every week between Statesboro and Atlanta. I think the company he worked for thought Statesboro was a suburb of Atlanta and didn’t question the move. Many weekends mom, my sister, and I would fly from Savannah to Atlanta to stay with Dad over the weekends in a hotel. I remember thinking that was just the coolest thing. I also distinctly remember the ashtrays and people smoking on the planes.

When I was in my early teens, Dad decided it was time to give up all that overnight traveling and do something closer to home. My memory isn’t the greatest and I can’t remember the order in which everything happened. I remember he came close to buying the county line liquor store, and also another time a convenience store. But what he settled on buying was a cricket farm. That is not a typo.

What the hell is a cricket farm, you ask? Quite simply, it is where crickets are grown and sold for fish bait. The company was located in a warehouse type facility in a residential neighborhood on the westside of Statesboro. I always thought it was weird it was in that location. Surely it was something else before being a cricket farm, but I don’t know. I think talking about cricket farming might be an enjoyable episode. I’ll have to look into that.

Cricket farming kept dad close to home but the hours were crazy. Once you raise the crickets you have to have somewhere to sell them. The purchase of the farm also included a few routes where we sold the crickets to retail bait and tackle stores. We sold crickets from Savannah to Macon and even a small part of South Carolina. Bait was (and still is, I guess), big business. We sold a lot of crickets. And, eventually, he got into selling worms and minnows. Those were outsourced, though.

One thing about people who fish, they often like to do it first thing in the early morning. That meant Dad had to be up at 3 am or so to go to work on route days. That also meant, during the summers, that I also had to get up that early and go with him on the route. I did not like that as a teenager. Once I turned 16 and got a driver’s license, Dad would let me take one of the smaller routes on Saturdays and make myself some spending money.

We had 2-3 vans that were heavily insulated and had RV type air conditioners to keep the bait cool while on the road during the heat of the Georgia summers. Actually, when I turned 16 instead of getting a car (like my sister did, hmph), I was told I could drive any of the cricket vans whenever I wanted. That actually didn’t last long, though, because I wrecked my sister’s Chevy Monza 2+2 and she no longer wanted it after it was repaired. So that’s how I got my first car.

Those days selling on the route would be long. As I mentioned, we were up around 3 and often didn’t get back home until the evening. Those hours were grueling and, when I was riding along with Dad, I think I napped more than anything. And he’d just let me sleep. Technically, I was supposed to be getting the bait out of the van after dad went in and got the order. Many times he did that himself because I was asleep and he wouldn’t wake me.

And really, the reason it would take all day was usually because of dad talking to his customers. He’d stand there and shoot the bull with them all. All his customers just loved him. He was that type of man.

I look back on those days now with fondness. It gave me so much time to spend with dad that I had missed out on when he was an overnight traveling salesman.

If your dad is still with you, make sure to call or visit him this weekend. I can tell you from experience, they are gone all too soon.